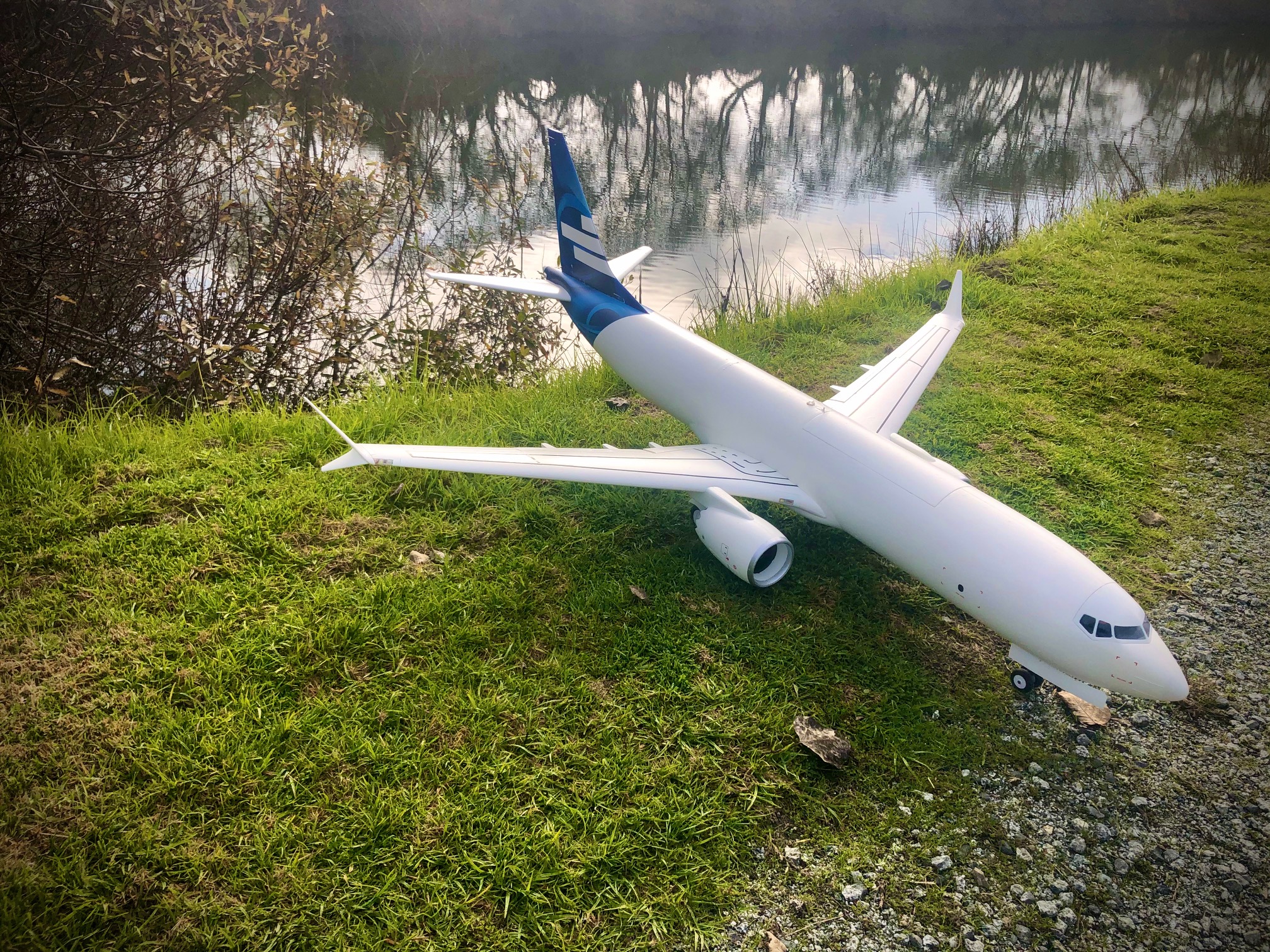 Correction: It was erroreously reported in the last Newsletter that Alan Brown had been the editor for 7 years.  He actually was for 17+ years!  Here is the oldest RCBees Newsletter he could find.  Bruce MacDuffee was the editor then. 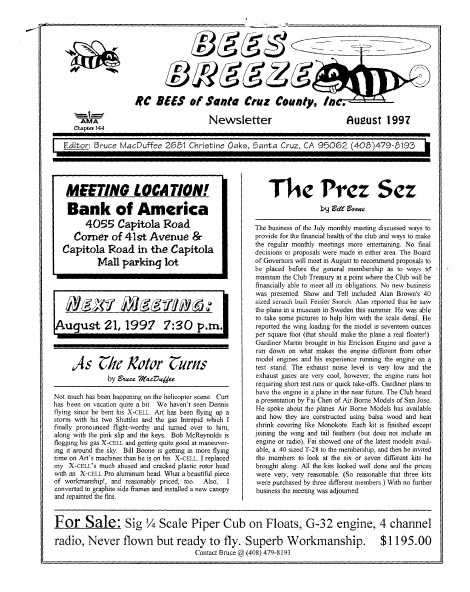 From the Squadron Safety Officer

There’s been concern with people talking to the pilots or the peanut gallery making lighthearted comments to them while flying.  Please try not to do that or at the minimum be respectful of pilots that don’t want to talk while flying.  Thanks for seeing how this keeps pilots and spectators safer!

The next Fun Fly will be Sunday 23 February.  Please register on the website as a pilot or spectator so you can count on a hot dog!

Richard Tacklin is building a Hobby Lobby Telemaster .40 from George Ribiero’s collection of vintage kits. Richard says, “Die cut balsa parts and a set of plans — just how I like ‘em.” 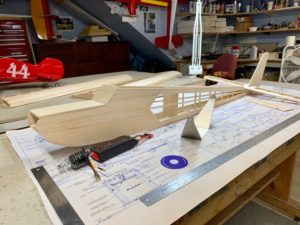 It’s now ready to be covered: 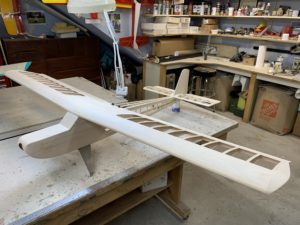 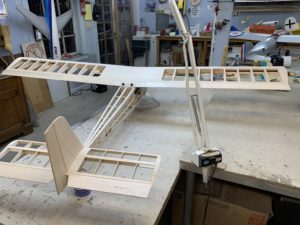 By Daniel Lipovetsky and production crew 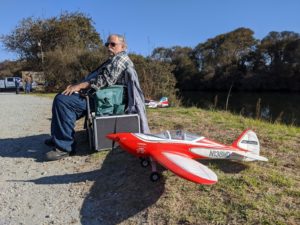 Dan Daniels put his E-Flite Commander through its paces on knife edge. Though it’s one of the best plane’s he’s ever flown, knife edge is no cakewalk, and he’s fine-tuning his rudder inputs. The aircraft profile view evokes classic aviation. 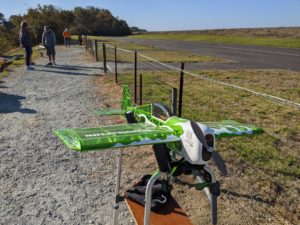 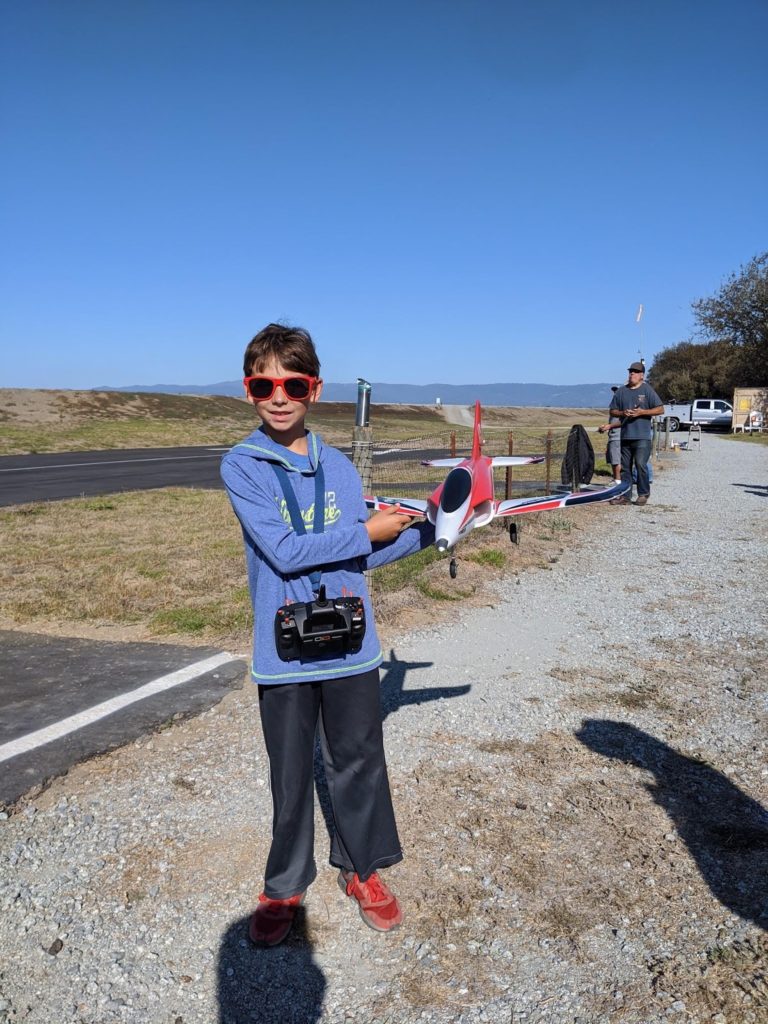 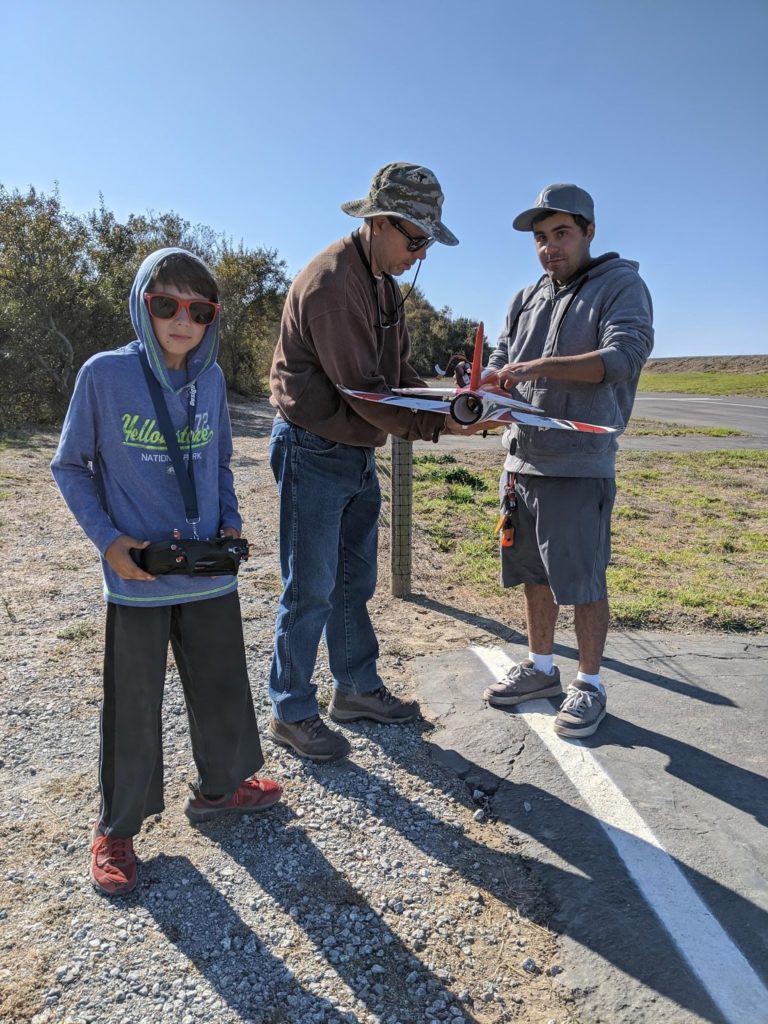 Joshua Albano, beaming with his Freewing Stinger 64 jet, after reaching a new level of mastery with the plane, including his first solo take off, under the tutelage of Jacob Boracca. Joshua sums up the plane as “fast and tricky,” spot on for a plane with a top speed of 85 mph and a weight 540 grams. Congratulations on your progress, Joshua! 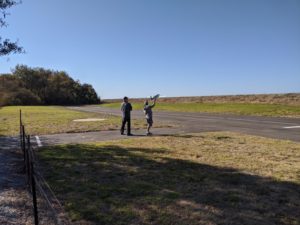 Returning to the club after a 30 year hiatus, Gary Buthman is seen about to maiden his Skynetic Havoc Racer 1000mm having been delayed a week due to some radio setup issues which were resolved with the help of various members, including Jacob Boracca, who also had a hand in the take-off. The plane wants to go flat out, and needs to be coaxed to land. The first touchdown saw the plane clip the grass and spin on its belly, but luckily come out unscathed.

However, just after takeoff, the cargo plane became hard to control. Jacob Boracca just managed to land on the runway. The Starship was safe, but the cargo plane had a large–but clean–crack through its fuselage. 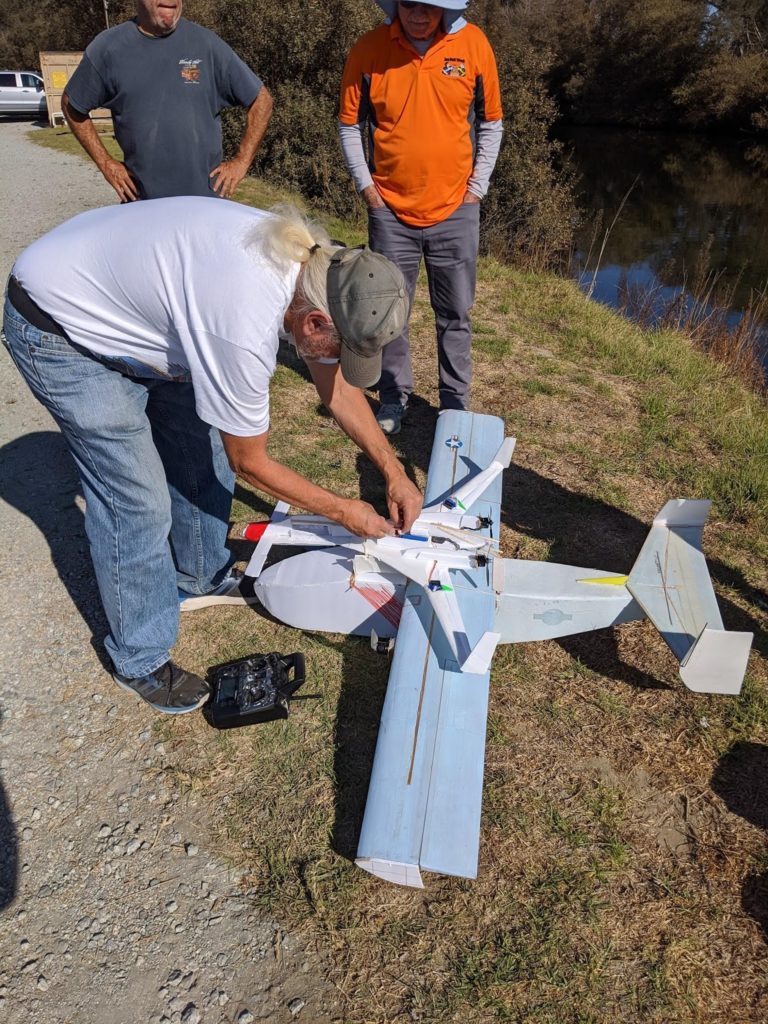 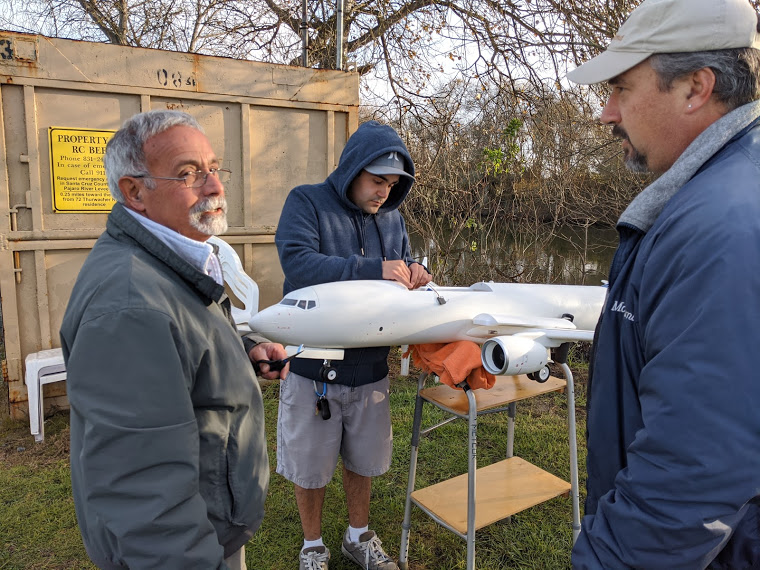 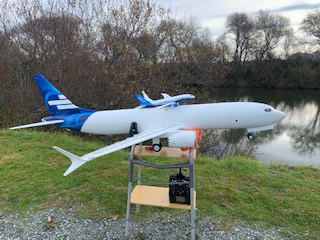 The scale range of our aircraft! 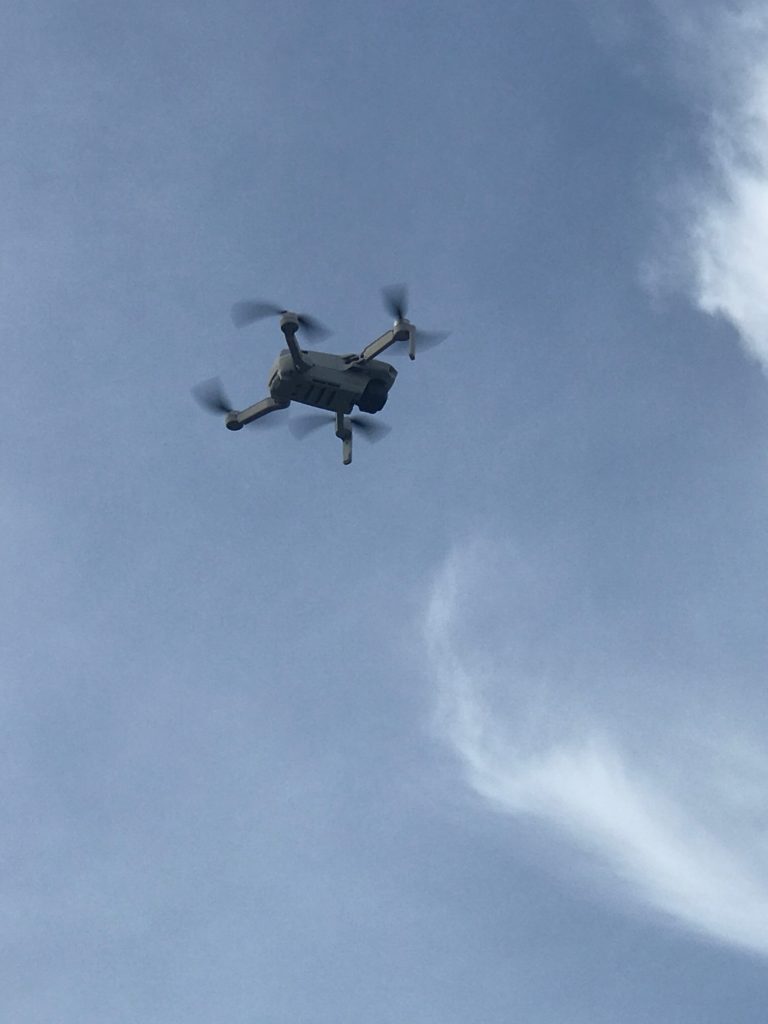 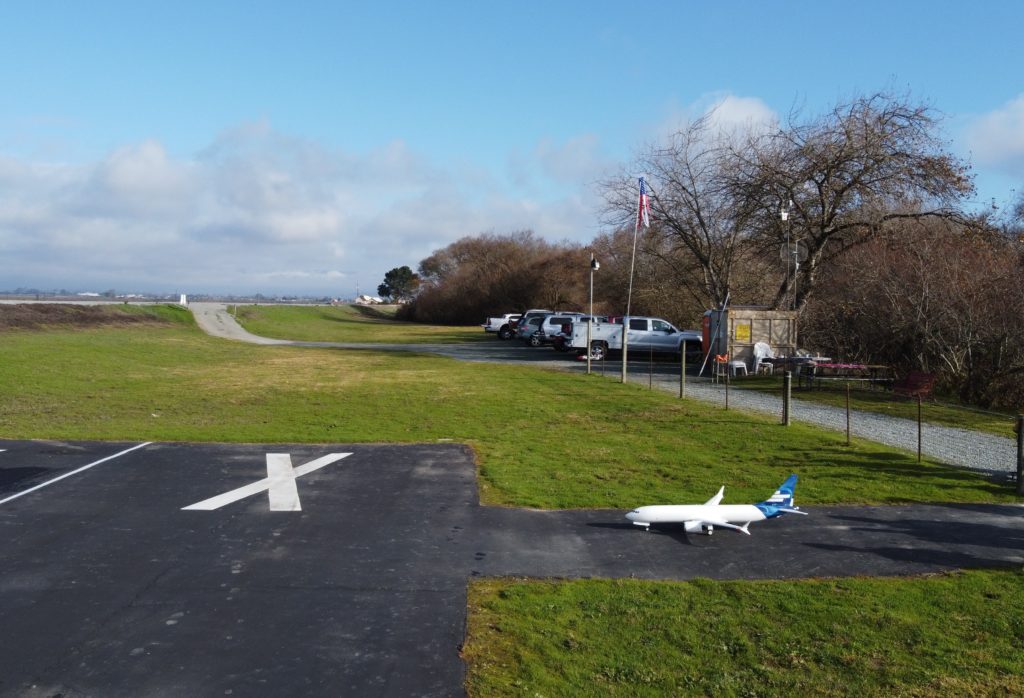 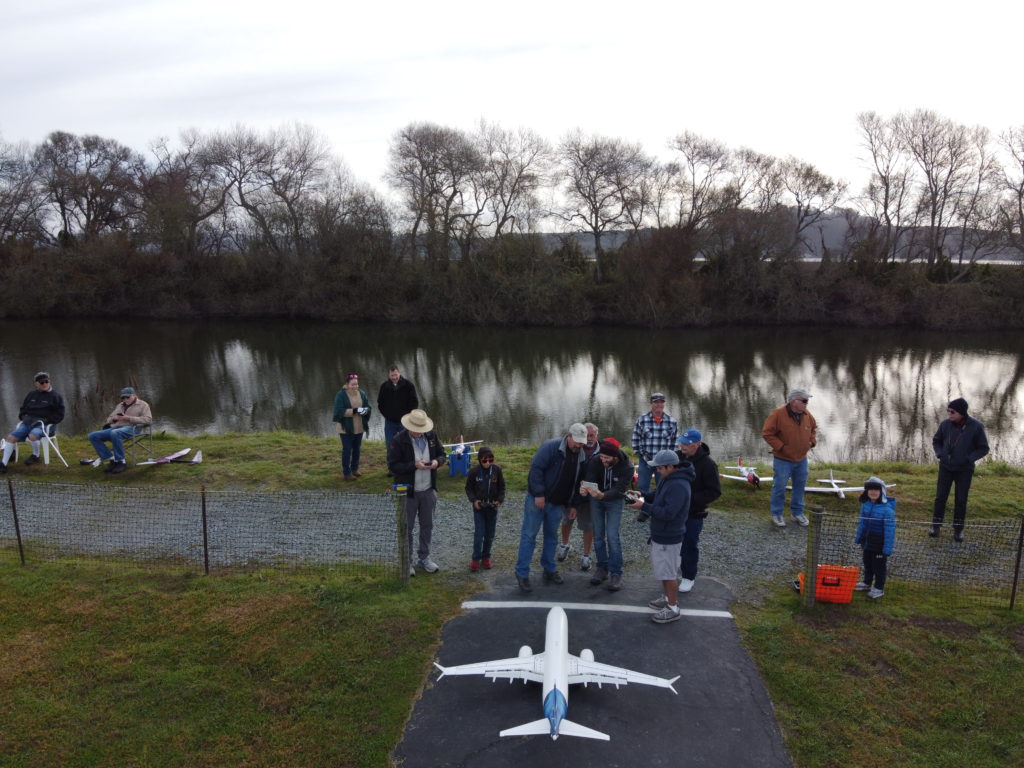 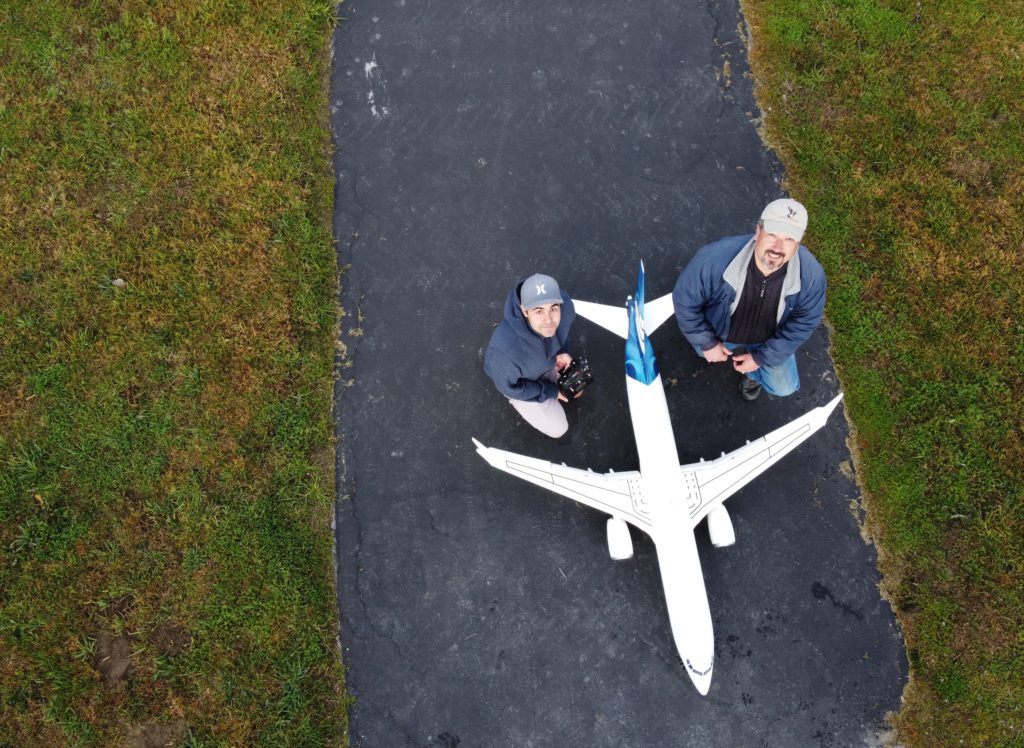 You’ve got to watch this video! 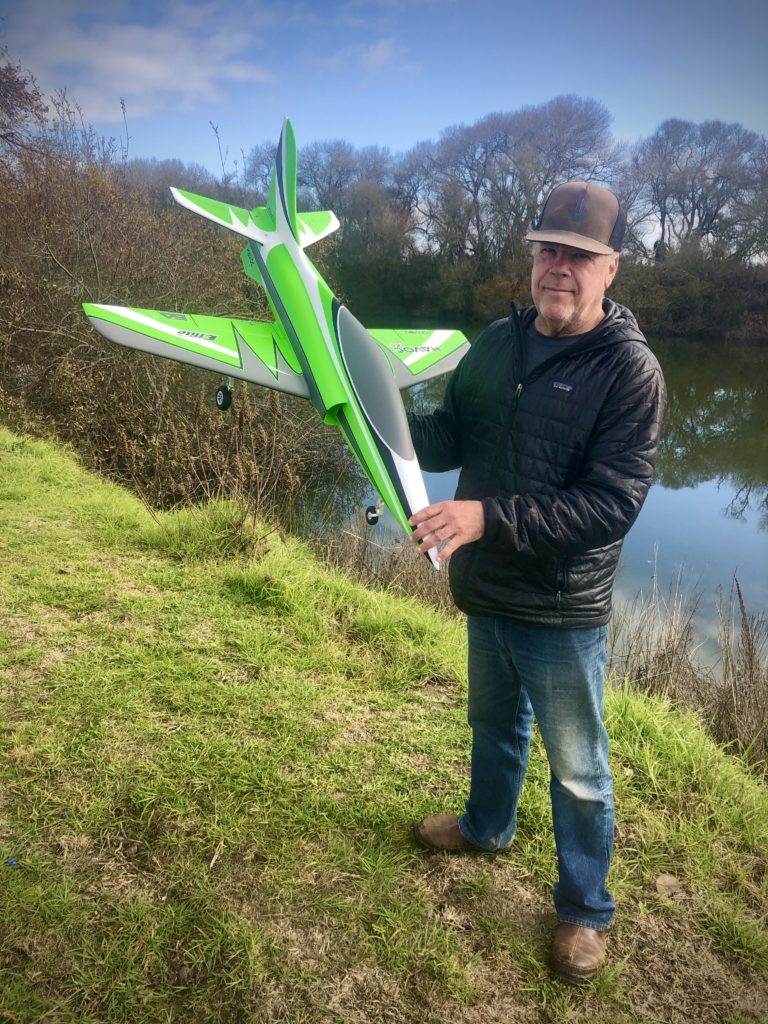 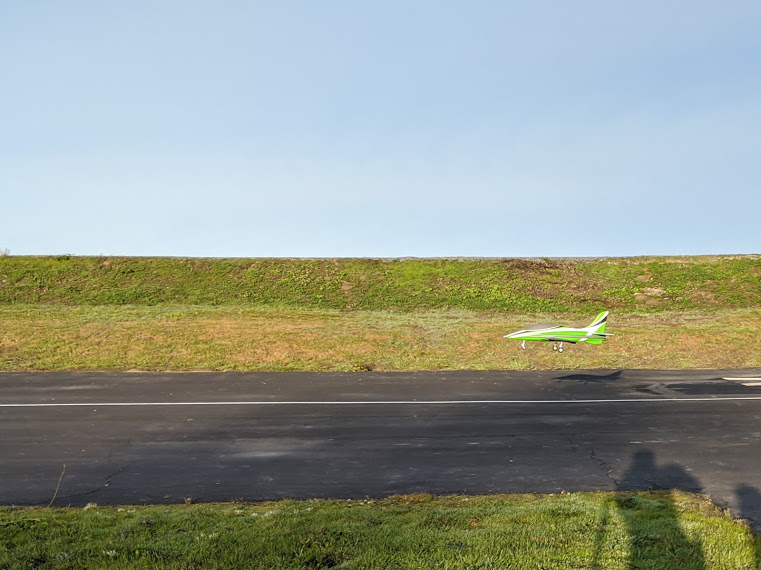 Jacob Boracca readied his Cesna 150 with camera.  He flew it while giving members time on the DGI headset.  {Editor’s note: nobody barfed} 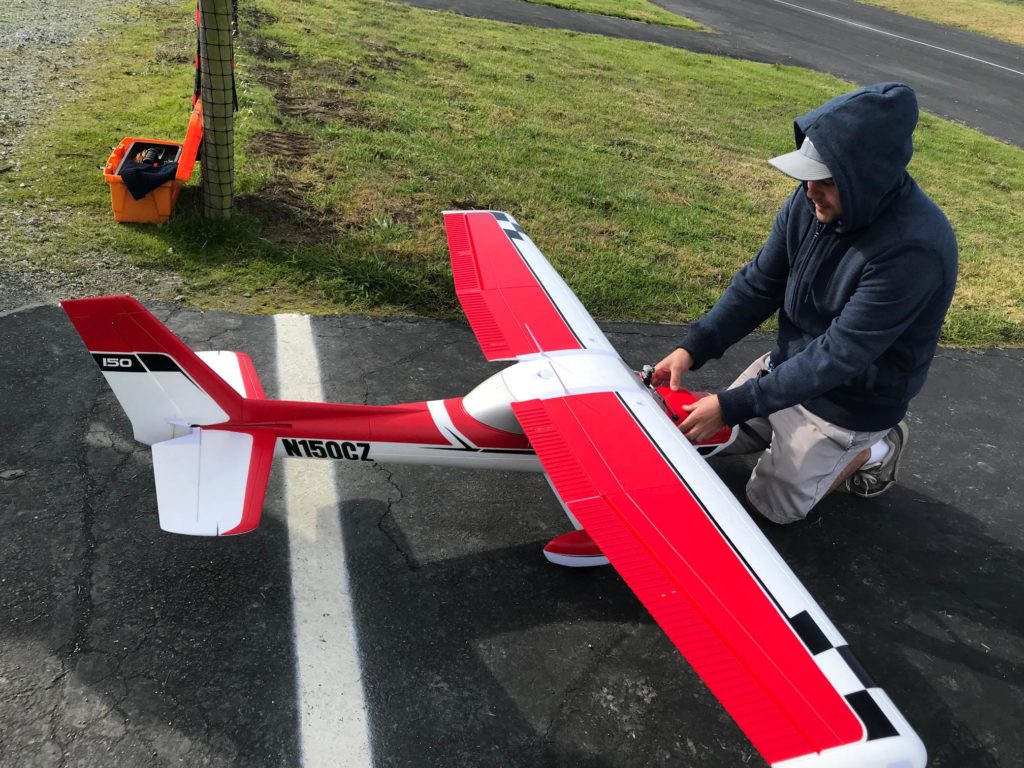 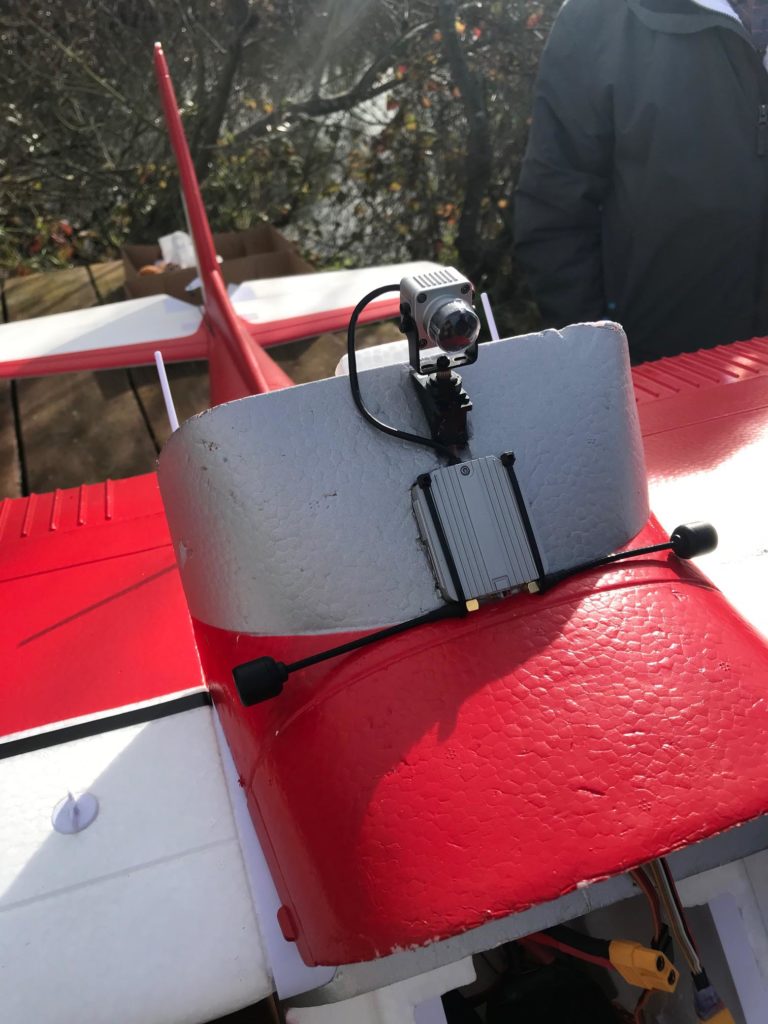 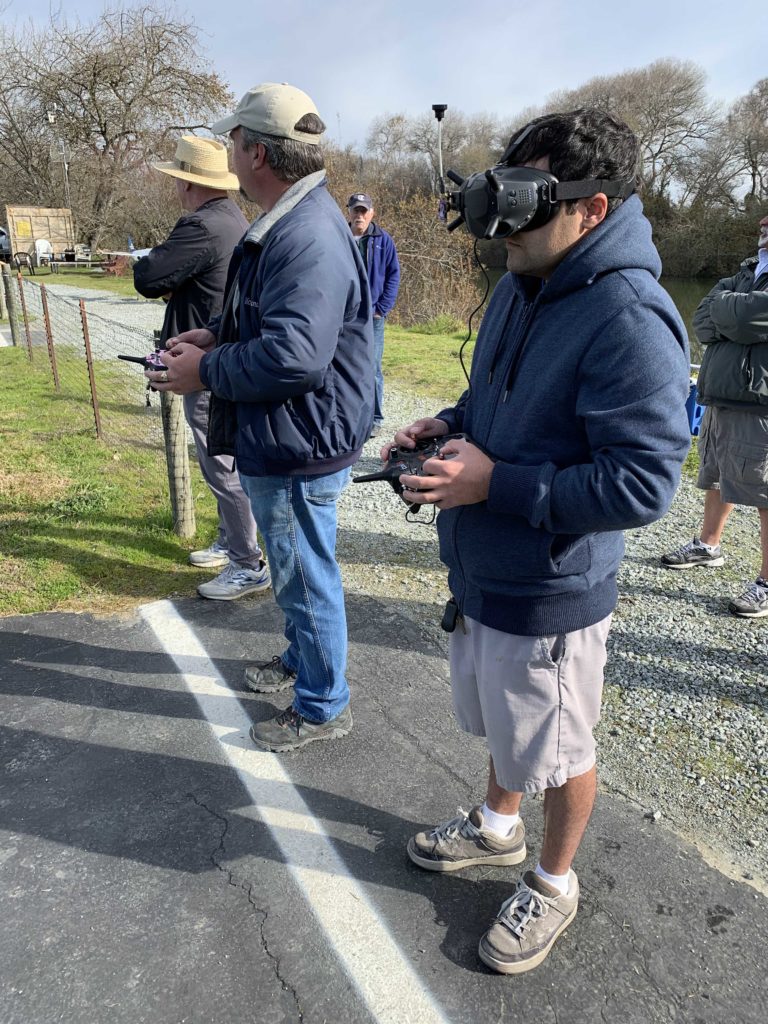 Sat, 1/25 saw beautiful flying weather with Steve Borraca making a low pass over a heron with his UMX Timber. {Editor’s note: no animals were injured in the making of this photograph.} 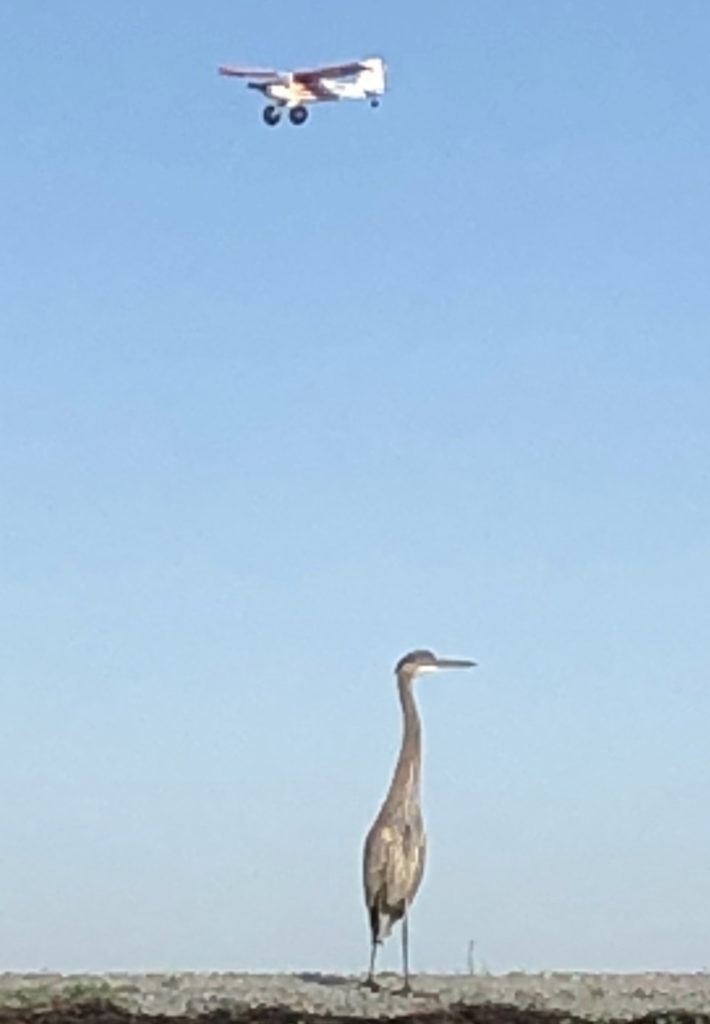 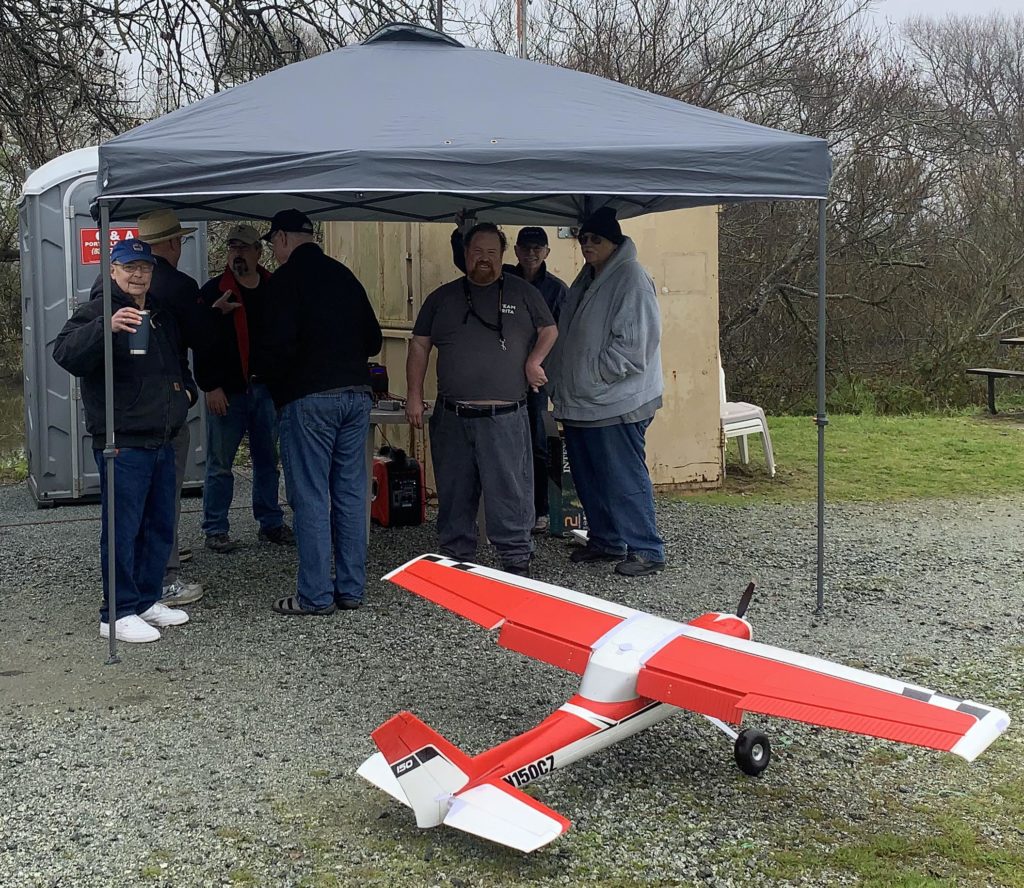 Sunday am (above) wasn’t quite as nice.

On the Technical Side

This article is stimulated by the photograph of the airliner wingtip shown below. 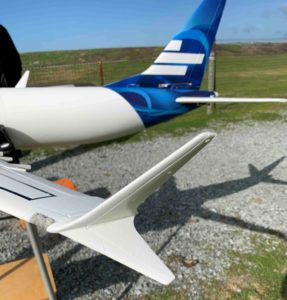 The purpose of the winglets is to reduce the drag normally associated with wingtip flow from the high pressure region below the wing to the low pressure region above the wing as seen below.

The idea dates back to 1897, when Frederick Lanchester patented wing end-plates as a method of controlling wingtip vortices. Since then Alexander Lippisch, the designer of the Messerschmitt 163, invented the so-called Lippisch ears, which were incorporated on the Heinkel He 162A in World War II, as seen below.

The first serious optimization was done by R. A. Whitcomb of  NASA in 1976. Here is his model in a wind tunnel.

And here are the results in terms of lift and drag.

In terms of improved lift/drag ratio, the upper winglet does fine by itself up to lift values close to stall, when the lower winglet also helps somewhat. Both configurations are substantially better than the plain wing.

Going back to our heading picture, the major manufacturers of subsonic airliners have each come in with their own variations on the theme, based on their own test results and the desire to be

Identifiably different from their competitors.

An obvious question that comes up is why not increase the aspect ratio and wingspan of your airplane rather than add wingtip fins? There are two reasons why this is not done. Firstly, the loads on the wing due to increased bending moments can quickly become unacceptably high, requiring a stronger and thus heavier structure. The second reason seems to be more mundane, but is just as significant in the design process. Most airports have runways and taxiways that are width-limited, and so the airplane manufacturer must design to fit where he expects his airplane to be used.

An interesting example of how airports design airplanes was in the Lockheed Constellation, which was originally laid out with a single vertical tail. However, Howard Hughes, who owned TWA, pointed out that his hangars were not tall enough to accommodate Lockheed’s fin height, and so the design was changed to a three vertical tail configuration.

So, winglets are here to stay, at least for high subsonic airliner competition.