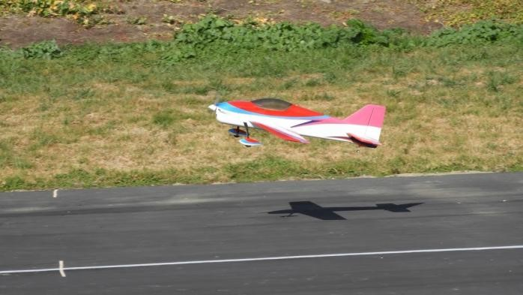 Correction: It was erroreously reported in the last Newsletter that the giant B737 belonged to Steve.  It’s actually Jesse’s.  Here it is airborne recently:

A Blast From the Past

Joe Slugo emailed that he enjoyed seeing the club members’ photos in the Newsletter.  Joe became the editor Dec ’92 but has lived in CO for some years now.

Some RCBees club rules from that era:

The Safety Corner
by Hugh Chalmers

With some of our pilots designing and building airplanes from scratch, a lot of times we don’t know what’s going to happen when the new design takes off.  The Board is asking compliance with this procedure for performing a maiden flight on a new creation or for one recently rebuilt from a crash.

A maiden flight needs to be clearly announced to the whole group.  Once all airplanes are on the ground and everybody is paying attention the maiden flight can be initiated.  Your cooperation in this will be greatly appreciated.

Our hobby appeals to the young and old:

Although challenged by gusty, variable winds, eight intrepid pilots demonstrated their skills at straight and level flight, an aileron roll a loop, a clean 360 and spot landing +/- 10 feet of target line. Heavier aircraft had a clear advantage int he burble!

Our guys going for the spot landing gold:

Joe Platin took 1st place with 53.0 total points. Nipping his heels were Michael Andalora at 49.6 and Dan Daniels at 49.2.  A mystery pilot trailed the pack with a whopping 11.0!

With a nudge from your editor, Bob Frogner and Dan Morris launched parallel projects to build foam dual P-51’s.